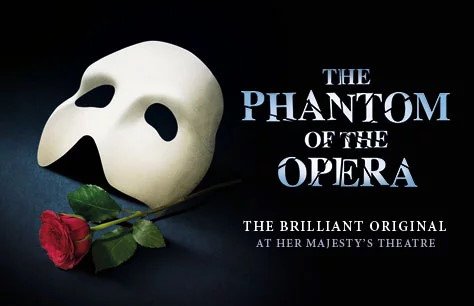 See The Phantom of the Opera in London, with theatre tickets to one of the most famous and successful pieces of entertainment of all time. This show has reached over 140 million people in 35 different countries, and has been playing in London at Her Majesty’s Theatre for almost 30 years. It tells the story of the Phantom, who lives below the Paris Opera House. Feared by all and shamed by his own appearance, he falls in love with Christian Daae, and his love is so strong that even she cannot resist. The music, composed by Andrew Lloyd Webber has made this production one of the most successful musicals. The Phantom of the Opera is shown from Monday to Saturday in London at Her Majesty’s Theatre.

About the phantom of the opera:

The Phantom of the Opera tells the story of the Phantom, a deformed composer who hides beneath the Paris Opera House, haunting those around. Underground and away from the world, he teaches and composes opera for Christine, herself a beautiful young soprano. As Christine grows to fame, a handsome man from the past enters the fray. The Phantom becomes livid, haunting and scaring the opera house owners. Even so, Christine finds herself attracted to the mysterious man. The musical production is based upon the novel by Gaston Leroux, and has been adapted into several film productions.

Phantom of The Opera Cast

Australian singer and performer Josh Piterman takes on the role of The Phantom. He is joined by Kelly Mathieson who plays Christine Daaé, the female protagonist of the work. British trained Danny Whitehead stars as Raoul, Victome de Chagny

The cast is completed by:

Phantom of the Opera Duration: