Our Hop on Hop off London bus tour includes a live guide and a river cruise along the Thames. Our sightseeing Hop on Hop off bus tour is the best way to travel to the most famous sites in the capital and see amazing places like Buckingham Palace, the London Eye, Big Ben and the Houses of Parliament. Learn about the history and fame of the city with an info-packed commentary. Save time and money with clever hop on hop off double-decker buses. Take advantage of our red bus route which covers all the essential places in London.

Our Hop on Hop off Bus is operating from 1 July. As an alternative, our Open Top London Bus Tour is currently running.

Hop on Hop off highlights

Hop on hop off London routes 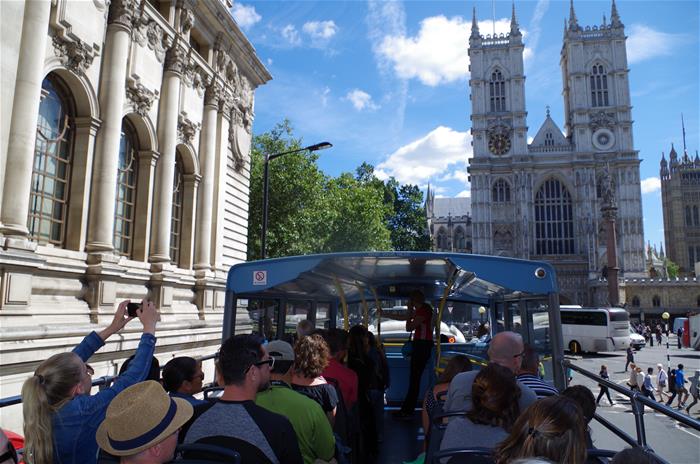 The Red Route is the primary hop on hop off route which goes to the best of London sights and attractions. Highlights include the Tower of London, St Paul’s Cathedral, London Eye, Tower Bridge, Trafalgar Square, The Shard, & Leicester Square. You also get to cross the River Thames twice, so brace yourself for some amazing views! AND the route includes a really entertaining live guide!

The Pick Up/Drop Off Route (Yellow route): Operating in the morning, this route travels from the popular hotel districts to Central London (Bayswater & Paddington).

Your cruise takes you along the River Thames, starting right by Big Ben (at Westminster Pier) and heading all the way up to the Tower of London. It includes a live commentary from the captain and audio guides available via your Smartphone in Spanish, Chinese, English, French, German and Italian. Your cruise lasts 30 minutes.

You’ll pass by some really amazing places along the way like Tower Bridge, the London Eye, Shakespeare’s Globe & the Houses of Parliament. Totally worth it!

Included for free in the hop on hop off bus ticket, choose between two really cool walking tours: