Buckingham Palace serves as the official London residence and headquarters of the King of the United Kingdom. It is part of the Buckingham Palace Neighbourhood that stretches all the way from Trafalgar Square to Big Ben and the Houses of Parliament. The Palace houses 775 majestic State Rooms and its private garden is the largest of its kind in London. It is guarded by the iconic footguards of the Household Regiment who frequently hold an impressive ceremony called ‘the changing of the guard’, which can be viewed on our guided day tour of London. The beautiful staterooms and gallery of the palace are also open to the public at selected times of the year.

There are lots of hotels near Buckingham Palace with excellent transportation links closeby for visiting other parts of London.

What to do in Buckingham Palace: 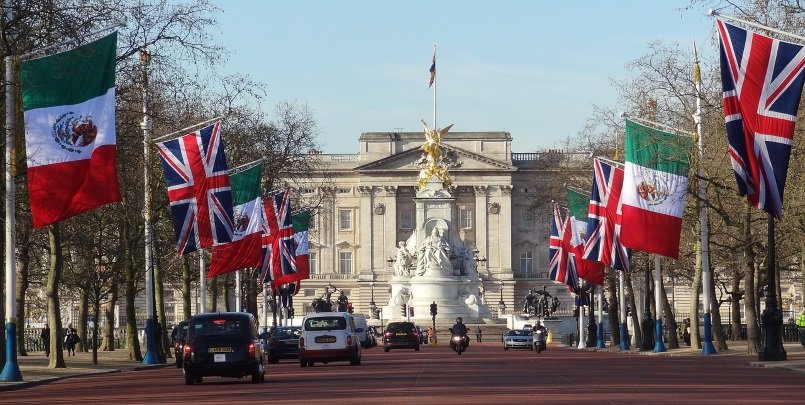 View the Changing of the Guard:

These colourfully dressed guards turn out to officially hand over the responsibility of protecting Buckingham Palace from the old to new guards. A marching band provides musical accompaniment, playing uplifting tunes. The best place to view the ceremony is by the railings in front of Buckingham Palace.

Open to visitors only in the summer, the 19 beautifully decorated Palace state rooms are where the Monarch carries out many of her official duties, including receiving visiting dignitaries and entertaining guests.  The rooms are filled with wonderful wallpaper and beautiful furniture as well fine sculptures and artwork. Also included in the visit is a viewing of the grand staircase and the throne room – a backdrop to many of the famous royal photos.

A visit to the state rooms can be combined with a tour of the Buckingham Palace garden, a beautiful 39 acre space with over 350 types of wild flower, a three-acre lake and over 200 trees. Gems of the tour include viewing the Summer House and Rose Garden, the tennis court and the impressive Waterloo Vase

It took over 100 years for Buckingham Palace to become the official residence of the monarch in 1837. Since then it has since undergone many enlargements and renovations to become its present form of 775 impressive rooms adjoined by a large private garden. Those rooms are furnished with impressive paintings by artists including Rembrandt, Ruben and Vermeer. The Palace serves as the primary residence of the King, hosting over 50,000 guests per year, including official visits and banquets.

There are many ways to visit Buckingham Palace.