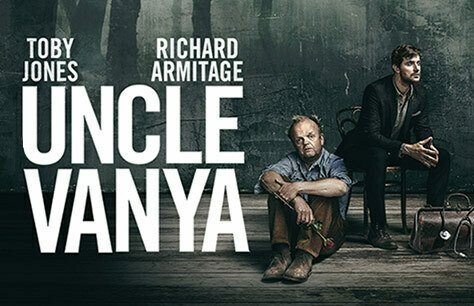 Uncle Vanya by Chekhov is on in London from 14 January to 2 May 2020 at the Harold Pinter Theatre. Chekhov is one of the great Russian playwrights and Uncle Vanya is considered amongst his greatest works. First premiered in Moscow Art Theatre in 1899, it is still widely performed 121 years later. The play takes place at the rural Russian estate of literary critic, Professor Serebryakov in the 19th century.

This new adaptation sees Toby Jones, famous for his roles from Capote to Hitchcock to Captain Mainwaring, play Uncle Vanya. The local doctor Astrov is played by English actor Richard Armitage, whilst Aimee Lou Wood who is best known for her role as Aimee Gibbs in the Netflix original comedy-drama series Sex Education takes on the role of Sonya.

Uncle Vanya, a play by Chekhov, is on show in London from 14 January to 2 May 2020. You can see further information here.