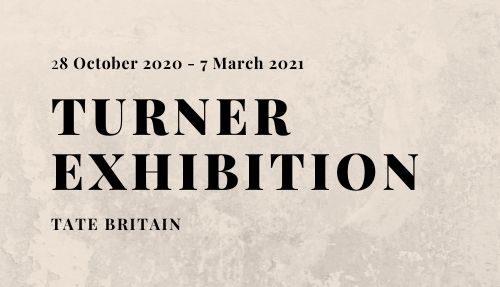 The Turner Exhibition at Tate Britain is on from 28 October 2020 to 7 March 2021. The exhibition is dedicated to the works of J.M.W Turner, who broke with convention to paint the times in which he lived. Working at the peak of the industrial revolution, Turner turned to paint modern life, from steam boats to railway engines and more. It also looks at his engagement with the Napoleonic War, 1832 Reform Act and the campaign against slavery. Highlights include The Fighting Temeraire 1839 and Rail, Steam and Speed 1844.

The Turner Exhibition is on at Tate Britain from 28 October to 7 March 2021. You can read more about it here.