The Tower of London is one of London’s most iconic sights, a Royal Palace, and one of the oldest castles in England. It has witnessed over 1000 years of British history. Designated a UNESCO World Heritage Site, the Tower of London has been the scene of some of Britain’s most important historical events. Its turbulent history has seen two kings and three queens executed, and many other important historical figures imprisoned. Situated in the City of London, highlights of visiting the Tower of London include seeing the spectacular Crown Jewels and the incredible royal collection of diamonds and gems, worn by members of the Royal family on state occasions. Also, explore the magnificent Royal Armouries which include the medieval arms and armour of former kings. Enjoy a free tour with the iconic beefeaters to hear the tales and learn the legends of the Tower of London.

what can you see with your tower of London ticket?

See the Crown Jewels with Tower of London tickets, featuring some of the largest and most spectacular diamonds and crowns in the world. Especially awe-inspiring is the Imperial State Crown – this alone has 2,868 diamonds, 273 pearls, 17 sapphires, 11 emeralds, and 5 rubies. These Jewels are a powerful symbol of the British Monarchy and have been used for hundreds of years as part of coronation ceremonies. Today, the King uses items from the collection as part of important national events, from the opening of Parliament to royal funerals.

Built to deter Londoners and terrify foreigners, the White Tower stands as one of the most important buildings in Britain. The magnificent Chapel of St John, which lies on the second floor of the Tower, is a masterpiece of Norman architecture. The impressive collection of the Royal Armouries displays the armour and arms of famous kings, including Henry VIII, Charles I and James II. 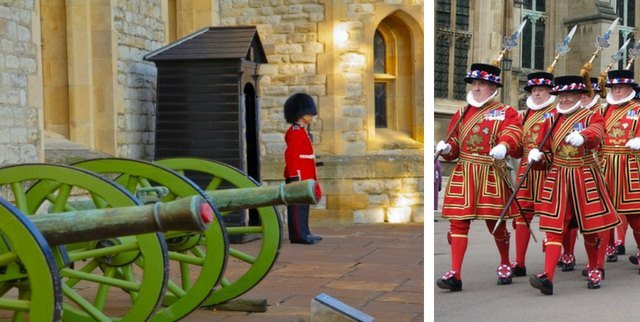 See the Guards at the Tower of London!

One of the most popular things to do at the Tower of London is to join an entertaining tour on the day with a Yeoman Warder (popularly known as Beefeaters), included in a Tower of London ticket. In the course of 1 hour will, the Beefeaters will guide you around and entertain with the many stories of trial, execution, imprisonment and torture that have made visiting Tower of London what it is today.

Visit this exhibition held at the bottom of the Wakefield Tower to learn about the towers violent past with its torture of prisoners. Discover the terrifying torture instruments and the dark history the Tower of London has had with some of its most famous prisoners.