Our Royal Mews London tickets take you to one of the finest stables in existence, located within the Buckingham Palace complex. Discover the spectacular vehicles used by the Royal Family, and you’ll even get to try out a Royal Carriage! Be transported through royal history by historic coaches and carriages from the dazzling Gold State Coach to the Diamond Jubilee State Coach. You’ll discover the working stables, learn new skills, sit in a coach, dress up and more!

Why Visit the Royal Mews? 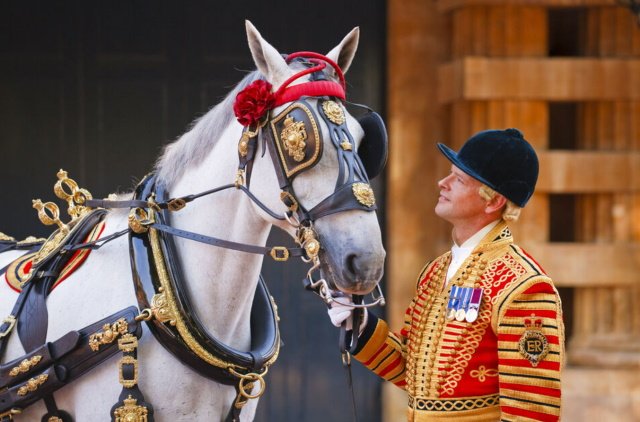 A Windsor Grey horse & rider at the Royal Mews

The Royal Mews is more than just a museum, it’s a working and breathing part of royal life. This place plays an important role in many of the ceremonies and day-to-day activities of the Royal Household. Visitors can get a feel of 21st Century royal living, along with that of bygone centuries.

The Royal Mews houses many of the carriages and motorcars that are used for official state occasions, both at Buckingham Palace and nearby Windsor Castle. Many of the horses, carriages and vehicles that you’ll see during the visit would have been used on important occasions. This includes the wedding of Prince William & Kate Middleton, the Queen’s Coronation, the opening of Parliament, the funeral of Prince Philip funeral and much more.

When you enter the Royal Mews, you’ll first visit the riding school, which is the oldest part and where royals practise their equestrianism. The nearby quadrangle with the clock tower is the point of entry for horses that enter from Buckingham Palace Road. To the right lies the coach houses with impressive carriages and automobiles that are still used today for ceremonies. You’ll also pass by the state stables, where the horses are kept, each one named by The Queen. And at the end of your visit, you’ll pass arguably the highlight of the trip, the Gold Stage Coach. This is the most impressive of the coaches, and requires 8 horses to pull it!

A typical visit lasts around 45 minutes and is a wonderful way to get a glimpse of the ceremonial aspects of life at Buckingham Palace and the royal family.

When will the Royal Mews Reopen?

The Royal Mews opens from Thursday 19 May to Sunday 2 October 2022. Tickets must be purchased in advance.

What are Royal Mews Opening Times?

Can you see Horses at the Royal Mews?

Yes! You can see the horses which are used to pull the carriages. There are two types of horses used for these official duties. Windsor Greys are used for royal occasions, whilst Cleveland Bays pickup ambassadors, high commissioners and are used for day-to-day activities.