Get Hampton Court Palace tickets and discover one of the grandest and most impressive British homes. History comes pouring out of every brick and stone of this mansion and highlights of a visit includes admiring the stunning Tudor architecture, seeing the magnificent collection of artwork and enjoying one of the finest English country gardens with over 60 acres of lush green space and a maze garden that is simply amazing for kids.

What to see at Hampton Court Palace:

Henry VIII’s State Apartments are a highlight of a visit to the palace. Start with an excellent that depicts the life and death of the Kings, eight wives. Highlights of the apartments include the Great Watching Chamber, as well as the King’s Council Chamber and the Processional Route linking the rooms. Not to miss is the Great Hall which stands as England’s last and great medieval hall, housing a beautifully decorated hammer-beam roof and wonderful tapestries.

Explore the Tudor Kitchens, which in Henry VIII time were used to feed ad least 600 people a day. Live cookery events throughout the year allow you to see and taste traditional Tudor cooking.

The chapel royal is the location that King Henry VIII and Anne Boleyn were married as well as where the Kings son Prince Edward was baptised. The Tudor pendant vaulted ceiling is one of the finest in England. Regular services are held on a Sunday, with a congregation of more than 400 people attending. 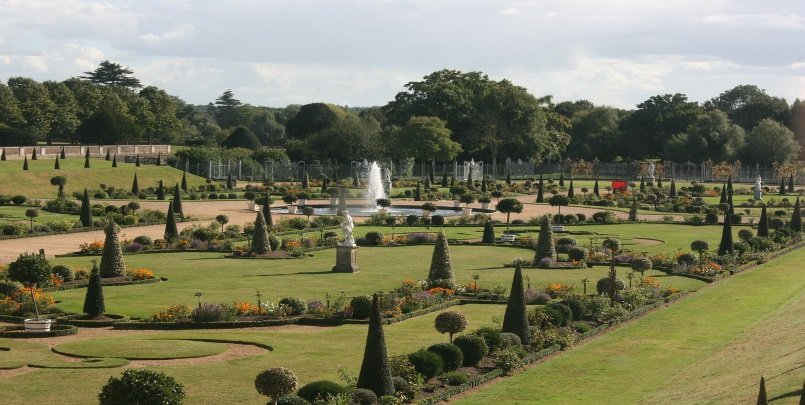 Hampton Court Palace is famous for its magnificent gardens, and a visit is included within the ticket price. 60 acres of beautiful Hampton Court Palace gardens stretch from the Palace to the River Thames and include wonderful fountains, over 1 million flower bulbs and 750 acres of peaceful royal parkland.

Highlights of the gardens include:

How to get to Hampton Court Palace:

Hampton Court Palace dates back to the 16th Century. Constructed on the bank of the River Thames by Cardinal Thomas Wolseley, it was soon to be inhabited by King Henry VIII who immediately began making substantial changes to the palace. During his reign, many important events took place here. It was at Hampton Court that the King sent his first letter to the pope threatening to break with the Roman Catholic Church, and was also where he divorced and married several of his wives. But by the late 1600’s, large parts of the Tudor palace had been demolished by Sir Christopher Wren, this time making renovations and extensions for King William III and Queen Mary II. When some 70 years later George III became king, the palace was abandoned as a royal residence and was instead divided up into apartments and residences.