Get tickets to climb the roof of the O2 Arena. Discover this famous venue from a whole new angle with an unforgettable 90-minute climb over the iconic roof! You’ll get to see sweeping views over London, including historic Greenwich, The Olympic Park and Canary Wharf during a daytime climb. Alternatively, choose to climb at sunset or twilight for a romantic experience. Knowledgeable guides will be with you during your climb, and you’ll be kitted out with climb suit, boots and harness. Just clip onto the walkway and go on up! 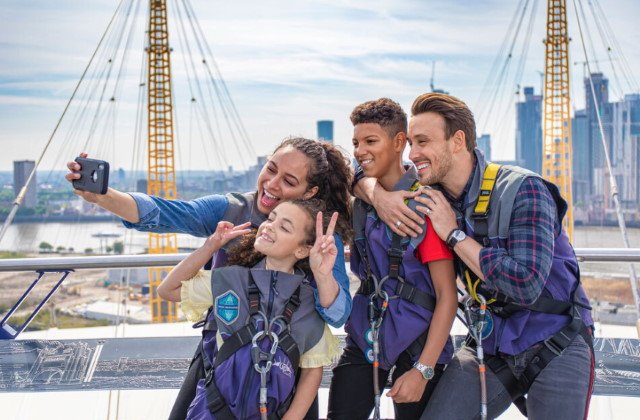 Champagne at the top

The iconic roof of the O2 Arena was formally known as the Millenium Dome. It has featured in lots of TV series and films. In the 1999 film, The World is Not Enough, there’s a famous boat chase scene which ends with James Bond rolling down the roof of the Dome. The roof has become an important part of London’s landscape, and can easily be seen from its location next to the River Thames. You’ll get to climb the roof of the O2 with these tickets!

The O2 Arena opened in 2007 under the former Millenium Dome. It is one of the world’s most popular music venues with many famous artists regularly performing at the venue. In 2008 it was the world’s busiest music arena! It’s also where the ATP World Tour Tennis finals have taken place for many years, hosting great players like Roger Federer and Rafael Nadal. In 2012, the O2 was used as one of the venues for the Olympic Games.

You can see further details about this product on the book now page. This includes important information to read before you go.