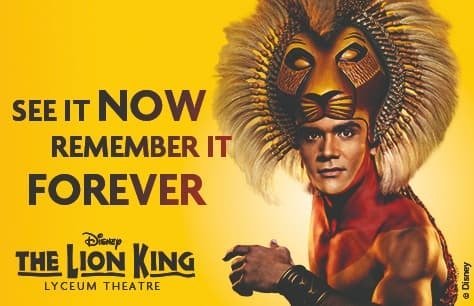 See the Lion King in London, with 2020 theatre tickets to this award winning musical. The show is based on the beloved Walt Disney animated film. With over 80 million viewers worldwide and 70 major theatre awards, there is, in the words of the New York Times, “simply nothing else like it”. It tells the timeless story of Simba on his epic journey from innocent cub to his destined role as King of the Pridelands. The Lion King is shown every week from Tuesday to Sunday in 2020 with tickets from £35.

The Lion King begins with Simba, newborn son of The Lion King Musafa, who introduces his son to the animals of the savanna. Whilst everything seems fine, the evil brother of Musafa, Scar, is plotting to become the new King. He orchestrates with his evil henchmen a stampede that kills Musafa. Simba, falsely believing he was responsible for the death of his father, secretly leaves. Presumed dead, Scar becomes King. Under his reign the Pridelands turns to wilderness. By chance, Simba meets his old friend Pumbaa in the jungle, and on hearing the horrors Scar’s reign decides to return. On returning, he eventually kills Scar and becomes king to the joy of all the animals. The original songs were writtens by Elton John, with score by Hans Zimmer.

Getting to the Theatre:

The Lyceum Theatre is located within walking distance of Covent Garden and Charing Cross Station. Other nearby stations include Temple and Embankment. Buses frequently pass along the Strand and on Aldwych.