Is the London Eye worth it? One of the world’s tallest observation wheels, it’s become an icon of the London skyline which offers breathtaking views over the city. A symbol of 21st Century London, tickets include a 30 minute ride on the Eye, as well as interactive guides and an entrance to the London Eye 4D Cinema Experience. Located in the Southbank neighbourhood, you’ll get to see right across the city, with views of major London landmarks like the River Thames, Big Ben, Tower of London and more. We’ll discuss if the London Eye is worth the time, money and effort and if there are worthwhile alternative attractions?

Is the London Eye worth the views?

The simple answer is yes. This is London’s equivalent to the Eiffel Tower and there’s no denying that London has one of the most impressive skylines in the world. On a clear day you can see as far as Windsor Castle, over 20 miles away! Landmarks you’ll definitely get to see are Buckingham Palace, St Paul’s Cathedral, the Houses of Parliament, the beautiful London parks, gardens and so much more!

Is the London Eye worth the price tag?

Here’s where things become a bit more complicated. Whether The London Eye is worth the hefty price is a tough one to answer. Tickets usually cost around £32 if you book in advance although there are some saver deals available throughout the year. So it’s not cheap, and it should be noted that there are cheaper alternatives to the London Eye out there that also offer impressive views over London. These include the Sky Gardens (free!), the Shard and the Emirates Cable Car. But it’s hard to say if they quite match the London Eye in terms of overall experience.

A little more about the london eye…

Since its opening it 1999, it has become one of London’s most famous landmarks and many visitors choose to take a tour to the London Eye, combining a visit with other major London attractions.

The London Eye has been praised by some of the greatest architects for its design. The famed Richard Rogers wrote that the London Eye ‘has done for London what the Eiffel Tower did for Paris, which is to give it a symbol and to let people climb above the city and look back down on it. Not just specialists or rich people, but everybody. That’s the beauty of it: it is public and accessible, and it is in a great position at the heart of London’. 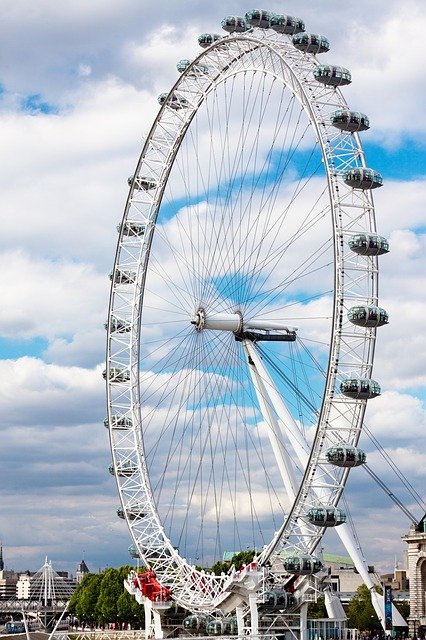 Since its opening in 1999, the London Eye has stood tall at 135 metres. Supported by an A-frame on only one side, it is the world’s tallest cantilevered observation wheel. It is the largest Ferris wheel in Europe, and the most popular paid tourist attraction in Britain, with close to 4 million visitors a year. The wheel was constructed in sections that were floated up the River Thames. The wheel was then constructed on the ground before being slowly lifted into place. The rim of the Eye looks like a bicycle wheel, and is supported by steel cables and special LED lighting allows the London Eye to light up in various spectacular colors.

The wheel has 32 air-conditioned and sealed oval passenger capsules which are attached to the wheel and rotated by motors, with each rotation lasting 30 minutes. Each capsule represents one of the London Boroughs and has a capacity of up to 25 people, who can both sit and walk around the capsule to admire the stunning views. In 2013, one of the Capsules was renamed to mark the 60th anniversary of the Queen’s coronation.

The visitor centre offers a fun and entertaining short 4-minute film that gives a completely new viewpoint and understanding of the city. Included within the ticket price, the film is located within the ticket office of the London Eye. A nice added addition, and definitely worth it.

tours to the London eye

There are many ways of visiting the London Eye. Consider taking a Best of London Day Tour which includes visits to The London Eye as well as the Tower of London, Buckingham Palace and St. Paul’s Cathedral. Prices start from £103 per person.