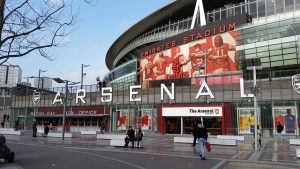 There are a few places to check to get tickets to Arsenal when sold out. On some of the highest profile matches, tickets can get sold out fast, but there is sometimes last minute availability. The best way to find a ticket for an Arsenal match is to check the following websites listed below.

If you are still unable to find a ticket, then fill out our football match waiting list and we’ll let you know the moment that tickets become available.

**For more information about how to get English Premier League football tickets in general, check out our dedicated article here.

This is the first place to check is here. Viagogo is one of the largest resale ticket websites in the world and often has availability for Arsenal tickets when other places are sold out. Due to high demand, prices can often be much higher than a regular ticket.

The second place to look for Arsenal tickets is here. Stubhub is often a good way of getting last minute Arsenal tickets. If you search the site but are unable to find tickets, this is a good place to check regularly, as new tickets are regularly posted on the website.

Arsenal is one of the top English football teams and regularly finishes in the top 4 of the Premiership. For the 2017-2018 season, Arsenal’s legendary coach Arsene Wenger returns for an incredible 22nd season! Over the course of his incredible reign at Arsenal, the team has won the Premiership and FA Cup titles, and has appeared frequently in the Champion League. The team has seen regular memorable matches against some of the top teams in England and in Europe including Barcelona, Real Madrid, Manchester United, Manchester City, Chelsea, Totthenham, and Liverpool. This makes tickets highly in demand and so very often for the highest profile matches tickets will get sold out fast. Having said that, there is often last minute ticket availability, especially on many of the resale webisites listed above. Prices vary enormously, and tend to go up in the days leading up to the match.