The Buckingham Palace neighbourhood is central to any visit to London. Spend a day walking by some of the highlights of the city including Buckingham Palace, the Houses of Parliament, Big Ben, Westminster Abbey and more. Starting the day at Trafalgar Square, you’ll walk through some of the most amazing parts of London including The Mall, St James’s Park and Westminster.

Update 2021: Buckingham Palace Garden is open to visitors for a limited time from 9 July to 19 September 2021. This is a totally unique opportunity to explore the garden of the King’s official London residence. Visitor numbers are limited, so book now to avoid disappointment.

We suggest starting your day in Trafalgar Square. This is a very central location and is really easy to get to by public transport, wherever you are staying in London. Alternatively, there are lots of hotels near Buckingham Palace and you can adapt your walk depending on where your hotel is located.

Charing Cross Tube Station (Northern and Bakerloo lines) has an exit directly onto the square. And nearby are the tube stations of Embankment (District & Circle lines) and Leicester Square (Piccadilly). 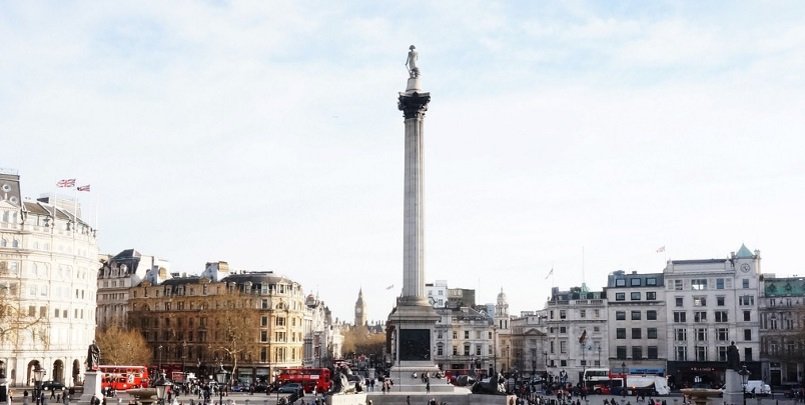 You’ve arrived at Trafalgar Square….welcome! You’ll immediately see Nelson’s Column (picture above) staring right at you. Nelson was a legendary Admiral in the British Navy who through exemplary leadership and cunning tactics led Britain to some of her most famous victories against Napolean. Nelson met his fate at the Battle of Trafalgar and in his honour, Trafalgar Square was named after him! 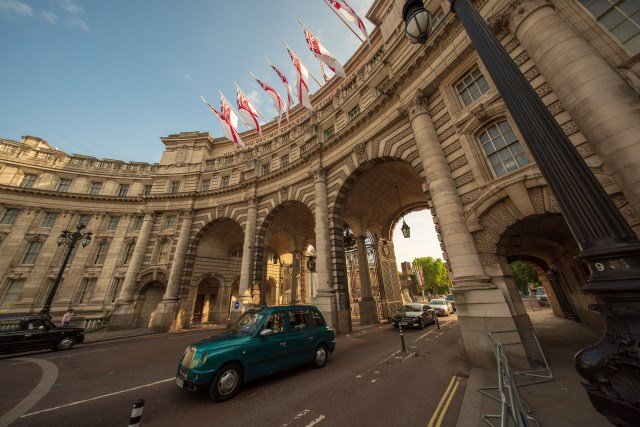 Admiralty Arch, marking the beginning of the Buckingham Palace Neighbourhood.

There are many roads leading from Trafalgar Square, making it really quite easy to lose your bearings. Look for the signs towards “The Mall” and look out for Admiralty Arch (picture above!)

Admiralty Arch was built by King Edward VII for his mother and over the years has been used by various government offices. You’ll see that the middle arch is closed off by a gate, and that’s because only the British Royal Family are allowed to pass through it! So walk through the left or right arch and you’ll have entered into the royal Buckingham Palace Neighbourhood of London! 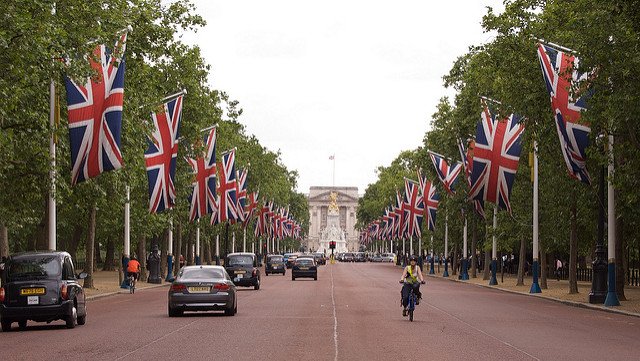 The Mall leading to Buckingham Palace in the distance. Photo by mrdoubtfire

Now on the other side of Admiralty Arch, you’ll be walking along The Mall. This 1km royal boulevard stretches from Trafalgar Square all the way to Buckingham Palace and is used for all kinds of state ceremonies. Back in 2011, hundreds of thousands of well-wishers lined The Mall to watch the wedding of Prince William and Kate Middleton. And from time to time you’ll see foreign dignitaries being taken to the gates of the Palace by horse drawn carriage…and whilst we can’t promise you such a grand entrance, the red tarmac and tall trees will make this all feel pretty magical! 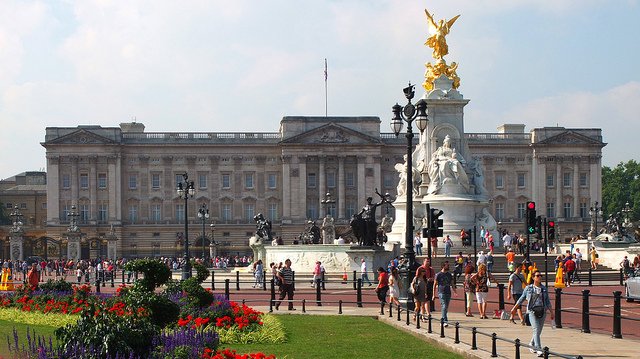 After about 20 minutes of walking along The Mall you’ll reach Buckingham Palace! At this point there are several things you should know: 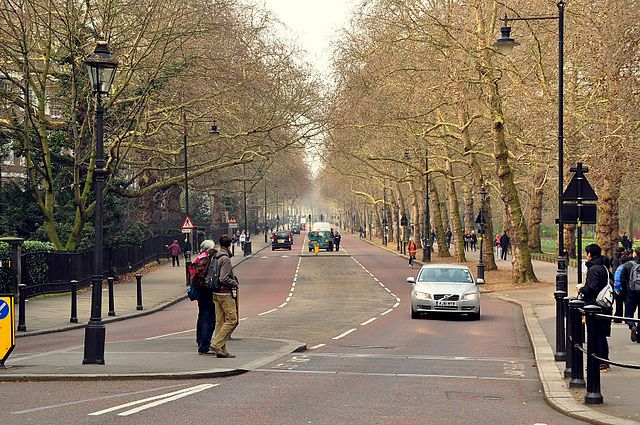 As you walk along Birdcage Walk, you’ll see the Guards Museum on your right. This is a British military museum which might be of interest if you’re a history buff.

And on your left you’ll see St James’s Park. This is one of the London’s most beautiful green spaces, and the perfect place to stroll through. If it’s nice weather, why not take a picnic and have lunch in the park?

The Churchill War Rooms are also located close to Birdcage Walk. These secret underground bunkers were used by Winston Churchill and the Cabinet during WWII. Getting there is simple – just make a left onto Horse Guards Road and the War Rooms are a little way up on the right, and this is a great place to visit with kids. 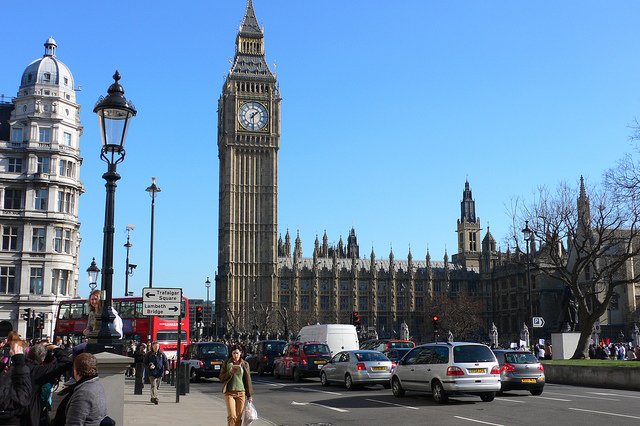 Continue walking along Birdcage Walk, which soon turns into St George’s Street, and you’ll soon see staring straight ahead of you Big Ben and the Houses of Parliament (see above!).

The Houses of Parliament is where the government of the United Kingdom sits and is a landmark of the Buckingham Palace neighbourhood. Bear in mind that you can’t go inside unless you book a tour in advance. Also, Big Ben is undergoing major restoration work which won’t be completed until 2021, which sadly means you won’t get to hear the chimes of Big Ben… 🙁

To the right of the Houses of Parliament is Westminster Abbey. This is one of the most impressive churches in England where Prince William and Kate Middleton got married in 2011. Inside the abbey are memorials to Churchill and Roosevelt and well as to famous English poets and writers like Shakespeare, Dickens and Kipling. Tickets costs £20 per adult, £9 per child.

Make sure to also have a stroll through Parliament Square (free!). You’ll notice lots of statues of famous people including Abraham Lincoln, Nelson Mandela, Mahatma Gandhi and Winston Churchill… 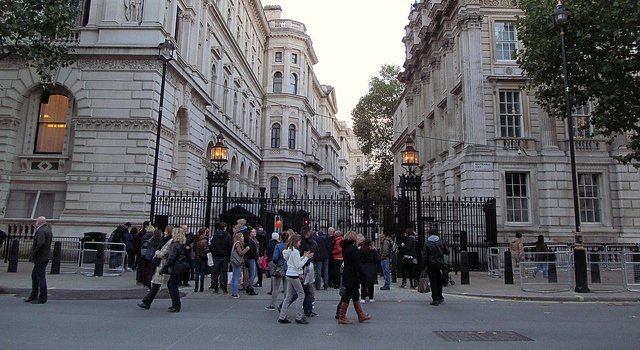 The gates leading to Downing Street. Picture by David Holt

If you’re standing facing Big Ben, take a left onto Whitehall Road. Now on the edge of the Buckingham Palace neighbourhood, you’ll pass the Cenotaph, Britain’s War Memorial, and will soon begin to notice lots of tourists crowding around a gate on your left. Those gates are the entrance to Downing Street (see picture above!), where the Prime Minister lives! You’re not actually allowed to walk along Downing Street, but its the perfect place for a selfie! 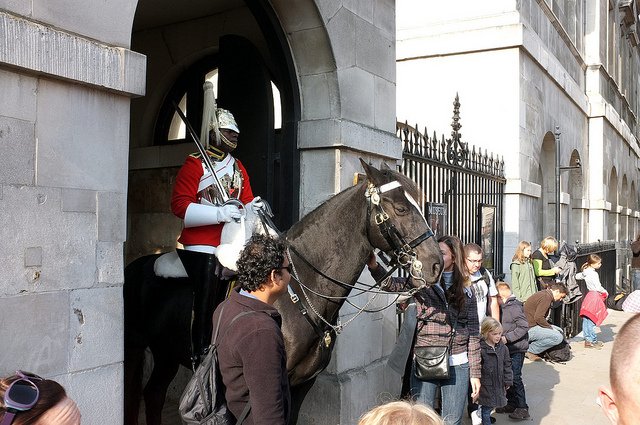 Continue along Whitehall and soon you’ll see another large crowd of tourists, this time outside the entrance to the Horse Guards Parade. Make sure to snap a selfie next to the soldier standing guard (picture above) and you can actually walk into the courtyard. Inside the complex is the Household Cavalry Museum which goes behind the scenes looking at the King’s horse-mounted bodyguards!

By this stage in your Buckingham Palace Neighbourhood walk, you’ll probably be feeling pretty tired from all that sightseeing!  Why not stop for afternoon tea or coffee at one of the pubs or cafes at the end of Whitehall? We recommend The Clarence, a traditional English pub serving great food and drink.

Back to Trafalgar Square

At the end of Whitehall, you’ll find yourself right where you started…Trafalgar Square!

End the day with a visit to the National Gallery (containing some of the world’s greatest paintings) or the National Portrait Gallery (the biggest collection of portraits in the world). Both museums offer free entrance and are located in Trafalgar Square!

A few things to point out